Hi, Before you start reading please take a moment to subscribe to the blog. We now have an easy subscribe box in the right sidebar. When we get a new subscriber we get really excited, so excited we start twerking, kidding totally kidding– no twerking, just super excited. 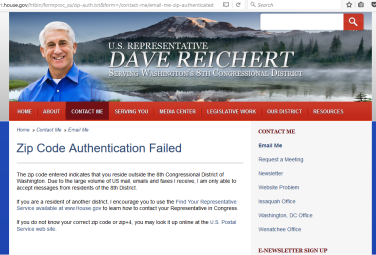 Earlier this week I decided to email elected officials from my state, Republican and Democrats, to tell them I want to see the Affordable Care Act continued in the new Presidential administration. Advocacy organizations (including mine) preach how important it is for elected officials to hear from community members. I figured I better do as I say and write to my elected officials.  I sat down at my laptop, looked up U.S. Representative Dave Reichert’s website, clicked the contact tab, filled in my zip-code and hit a roadblock. Because I don’t live in his district I’m blocked from emailing him via his website. I’m calling Fakequity; stalled by a technology barrier.

Putting up false barriers to hearing from people outside of a circle of influence, in this case constituents, means an elected official is only hearing from their own echo chamber. Elected officials represent all of us– including people outside of their zip-code boundaries, and they are expected to vote for the betterment of a country, city, school district, etc., not just their immediate districts. In fairness to Rep. Reichert this screen-out system of allowing emails from outside a member’s district is endemic to all of the U.S. House websites.

Equity work means we need to evaluate what barriers are in place preventing us from hearing diverse thoughts, especially from marginalized communities of color. When I asked friends and colleagues for advice on how to reach elected officials other than going through their websites I was told to call or write letters. I know I can call, as an introvert I prefer to write. I decided I’m going to pull out a booklet of Star Wars postcards leftover from a bygone fundraiser and to literally handwrite my messages — quaint isn’t it, good ol’ mail. Another friend said when she was a Congressional staffer the more unusual the messages were remembered, #AdvocacyTip. I have a lot of privilege in being able to pick up a phone and expect to be understood and heard. First, I have a cellphone with more than enough minutes on my plan to make all the calls I want and I can afford the postage it takes to send a postcard or letter, I am fluent in English, and I am a citizen. Many others cannot claim any of these privileges, which makes it harder to be heard. People most impacted by legislation and systemic barriers are our neighbors who do not have the privileges of owning a phone, being fluent in the dominant languages of our systems, or are afraid they will be persecuted if they speak up.

Barriers like a zip-code block on a website may seem innocuous, but the racial equity ramifications are there and need to be acknowledged. In legislative districts that are primarily white, tools and systems that screen out or block out voices unintentionally cause white voice echo chambers. This causes entrenched views and concentrates power and privilege versus redistributing power back to communities.

Elected officials, no matter if they are port commissioners, school board directors, city council, or a U.S. Senator or Representative are elected by a few, their districts, but they have a responsibility to all of us. Though I don’t live in Congressmember Reichert’s district I live in his state and his vote will reflect on Washington, not just his narrow district; the banners under FOX News and CNN don’t say Rep. Reichert from Issaquah, if it did most people outside of the state wouldn’t know how to pronounce Issaquah, instead it says Rep. Reichert from WA.

Elected officials and their staff need to have intensive understanding on the impacts of race in our systems. Every elected official, no matter the office, should have to take a minimum of 200-hours of high quality racial equity training of some sort. If they are expected to govern and make decisions in the best interest of all people, then they need to understand that decisions made impact people of color differently. Two-hundred hours may sound like a lot, but as Heidi (of the Fakequitty team) reminds me, it is less than an internship. Watching all the episodes of Grey’s Anatomy would take your more than two-hundred hours (currently 281 episodes). And really 200-hours is a pittance compared to the amount of time it takes a student of color to catch up because their schools are underfunded because of institutional and systemic racism.

We need to demand elected officials undertake ongoing racial equity training and continue to learn about race and its impact on society. The decisions they make, no matter as a school board director or as the President of the United States, have racialized consequences. Every vote impacts people of color in some way, we need to start shifting the systems of governance to ensure decisions have positive impacts and don’t reinforce systemic racism.