I’m back from a week-long road trip taking me from the Puget Sound to the Rocky Mountains. It was a great trip and I learned a lot along the way. It also made me appreciate how people and culture are rooted in place and how it can help to feed our resistance to whiteness. I wanted to write this post because it is time to focus on something positive; my past few blog posts have focused on heavy topics so hopefully, this one gives us some levity and in the words of Star Wars Resistance: “The Resistance Will Not Be Intimidated.”

To me, resistance comes in big and small acts. Resistance is standing up and marching and rallying and having a public display of actively resisting something, such as the recent rallies at ICE detention centers. It is also the small everyday acts of making choices and choosing racial justice. Resisting whiteness is a form of resistance that helps to build our racial and cultural understanding and tolerance.

A while back while on a different road trip I stumbled upon an article from YES! Magazine where Native hikers are reclaiming indigenous places by using geotagging and inputting Indigenous place names. As I wrote about before many of the places we know by today’s names are named by white people. Before colonization, Indigenous people had names for places and sadly many of those place names have been erased from our vocabulary and history. In personal and powerful acts of resistance, they are reclaiming history and place by making Indigenous place names known. On my road trip, I saw signage showing Indigenous names of towns and cities prominently displaced. It was a great reminder that I was on Indigenous land and we were guest on their land and at the very least I should learn about the history of their culture and place from the Indigenous perspective. 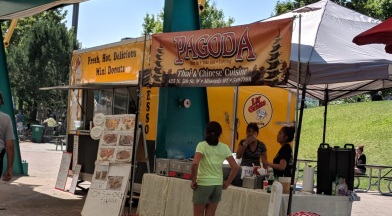 During our trip to Montana, we spent a few days at a very white campground in Missoula. While that wasn’t the highlight, the highlight was stumbling upon the weekly “Out to Lunch” festival at Caras Park. I ordered lunch from a Thai pop-up stand. While ordering the proprietor asked: “Where are you from?” This question is often fraught with layers of microaggressions, but from her I knew she was excited to see another Asian. We chatted and she told me how she immigrated from Thailand 20-years ago. Her daughter was there and I asked if she speaks Thai, which she does. It was a nice moment of being “with my people” in a land where we are rare– 1% of the Missoula population is Asian. In that moment we resisted the siren call to blend in and give-up important parts of ourselves, we resisted blending into the other 90+% of whiteness.

While packing for the road trip I had to choose carefully what to take. Four people, plus camping gear in a Honda Fit was a tight fit. The reading material I chose to take along was an important consideration knowing we would be in places without access to wifi and I had to limit how much reading material I could pack. I chose a book by a poc author to try to work on my Summer Book BINGO card. My reading books and material by authors of color is one important way I actively resist whiteness everyday.

Missoula Public Library and made us stop in. I didn’t fight his request since the library was air-conditioned and I was amused he wanted to go to a library on vacation. While we were in there he found some history books to browse and was bummed he couldn’t check them out. Resistance is watching my kid find books that interest him and talking through the material from a racialized standpoint. He’s making critical choices about information to take in and believe and he is developing his own resistance mindset. As a side note, I found these shopping carts by the door, shopping carts at a library – genius!

Museums – So many museums

As one does on road trips we stopped by museums and cultural centers. One of my favorites was Sqelixw-Aqlsmaknik (The People’s Center), a cultural center of the Salish, Pend d’Oreille and Kootenai tribes.

We also stopped at other museums and cultural centers. A few made points of highlighting people of color histories in the region. It was also at the museums where I encountered blatant racism. While standing next to a display on Japanese Concentration Camps (internment camps) an old white-bearded dude said to his white companion: “Those Japanese were [are] bad, but not as bad as Obama.” He meant the statement in both the past and present tense. My passive act of resistance as a Japanese American was to give him the side-eye and to move to stand next to him. I don’t think he noticed but it was my way of making my presence known to him.

Back in Seattle, I found more signs of resistance. Elections have been happening all over the country. I’m excited to see Ilhan Omar’s campaign for Congress. Ilhan is poised to become the first elected immigrant from Africa and the first Somali American in Congress. Knowing we have a president who is hostile to immigrants and actively pushing policies against Muslims and women, having Ilhan Omar in Congress will be an important voice for many of us regardless if she is ‘our’ representative. More locally women of color are running for office: Senator Rebecca Saldaña is running for re-election to Washington’s legislature, Debra Enteman is running for the state House, Pramila Jayapal for Congress, and so many others. For the women of color reading this I hope you will consider running and serving – there are many offices, commission seats, and boards that need to be filled—representation matters.

On Wednesday, I joined several teacher candidates for a few hours. My co-panelist was an African American, 30-year veteran family support worker, listening to him talk was a joy. Investing time into this panel was a form of resistance, I could have chosen to put my time elsewhere but spending time with the students gave me the gift of listening to Gerald who works daily with homeless students, families of color, and so many others. He resists allowing people to stereotype the students, he fights systems and prejudices, and most importantly he ‘sees’ kids who need to be seen. If we all worked just a little harder to see people of color we’d all be better off. Walking out of the school I stopped to admire student artwork of people of color, resistance through art is one of the oldest forms of resistance.

Resistance happens all the time and we need it to continue. Sometimes resistance is labeled as ‘troublemakers’ and annoyances (remember the good-guys in Star Wars are known as the Resistance), but they make a difference. I hope you’ll take some time to actively notice and applaud the resistances you see happening. Maybe with enough resistance, we can create a force that overthrows racism. In one last Star Wars Resistance quote: “The Light — It’s Always Been There. It’ll Guide You.”

If you subscribe to the blog, thank you. Please check fakequity.com for the most up to date version of the post. We often make grammatical and stylistic corrections after the first publishing which shows up in your inbox. If you would like to subscribe there is a sign-up box on the right sidebar (desktop version). Support the blog by becoming a Patreon supporter.