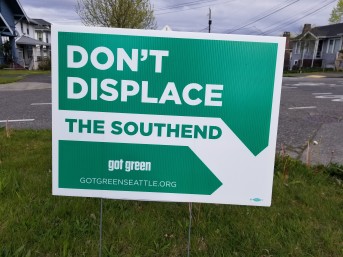 Yard sign “Don’t Displace the Southend” by Environmental Justice organization GotGreen. Check them out at gotgreenseattle.org/

I had a moment this morning where I found tangible signs of gentrification. I know my neighborhood is rapidly gentrifying but I wasn’t expecting to physically touch the gentrification. If I have a few minutes and I’m legally parked I’ll stop in my kids’ school to tidy up the lost and found. Today, I hung up a cute pink Kate Spade coat in the lost and found. This is a school with about a 50% free and reduced lunch rate, a high percentage of English Language Learners, and strong Latinx and Asian immigrant communities. When did Kate Spade invade our lost and found? As I was leaving the school a Tesla pulled up to let their white child out. I’m not surprised to see a Tesla, but it made me mourn a little knowing the Tesla and Kate Spade are tangible signs that the neighborhood is rapidly changing.

There are many lists on the internet of how to spot gentrification. Some of the lists are funny, other mournful, and most them have truth laden in them. In the interest of adding to the lists already out there here is another list:

Strollers – strollers that cost more than my brother’s first car are seen at the library storytime.

More stop signs and traffic signals – When my grandma was still alive, she would point out where the first traffic light was on Kauai. That is old-time gentrification, and I see the same in my neighborhood when the stop signs pop up, the no-parking signs are abundant because of construction.

Who’s on the train – Light rail is now filled with white people on phones and earbuds. No one looks up, faces all glued to blue light of the screens.

Bougie ice cream stores – Two high-end ice cream shops are now in the neighborhood where I work. The cost of an ice cream cone cost more than a gallon of gas on a good day.

Kombucha on tap is the new flannel shirt. Breweries are the new version of Asian karaoke bars.

People take pictures of Black and Brown kids in the neighborhood and post them online without permission versus saying hello or simply acknowledging their presence.

PTA events serve alcohol and their auctions raise enough to buy a modest house but not in the neighborhood of the school because it’s already gentrified.

The rats are gentrified out of their former living situation. A friend shared ever since a new apartment building went in she hasn’t seen a rat – even the rats were gentrified out.

Gentrification is more than the physical places we create. Gentrification is about refinement and the feeling of comfort. What would it look like if we all practiced a bit of anti-gentrification in the interest of preserving our sense of community? This doesn’t mean we bring the rats back to their former dwellings. What would it feel like if we acknowledged we acted like we are guest rather than in spaces to take them over and colonize them? We need to remember in most Western countries we gentrified Indigenous spaces. As guests in new spaces we don’t barge in and take over, we are polite and respectful, our survival depends on upon being gracious.

The desire to change a space is an act of gentrification. There are times and appropriate places where we need to make improvements to places to make things safer and improve quality of life, but we need to ask who’s benefiting. Changing housing patterns that allow more wealth into neighborhoods means displacement for longtime communities of color. The benefits of gentrification often won’t be felt by communities of color. Being a guest also means you invest and are helpful in building supporting what is already in place. As a guest you don’t go in demanding your host make changes to their house to accommodate you; you try to leave a light footprint and to be helpful to what is already there. The same for us as gentrifiers – invest in the local economy and not insist things change for your benefit. Shop at the local poc owned businesses, buy your coffee from the poc coffeeshops not Starbucks, volunteer at a school with a high concentration of students of color, share what you have, listen to the community that was there before offering your opinion. If you’re not hearing something maybe that is also a clue and don’t assume silence means people don’t care, it could be it isn’t the fight the people before you were willing to focus on. Take some time to learn from the community before you rush in to change things.

Special thanks to my friends who contributed their gentrification ideas to this post. Many of the examples came from them.