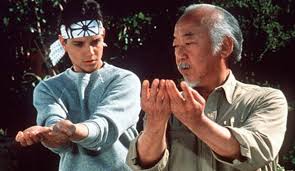 Photo from the movie “The Karate Kid,” Daniel wearing a Japanese headband with his hands out trying to learn Karate from Mr. Miyagi. Mr. Miyagi looking patiently annoyed.

Earlier today I spent time watching Heidi run a racial equity training. As a facilitator and a periodic trainer, I like to attend other people’s trainings to learn new skills and watch how others navigate conversations. Watching Heidi is sort of like watching a really fast-talking Mr. Miyagi (from the Karate Kid for the Millennials who don’t know this movie go look it up). She can break down racial equity concepts and have people practice the basics in new ways. One of the basics she reminded me of is extraction from communities of color. We heard this term and concept at the Othering and Belonging Conference we attended a few months ago. It stuck with Heidi; I don’t remember it but I remembered other important things like lunch and what time we had to leave for the airport.

I’m guessing most of us think of ourselves as good people who believe we don’t take things unfairly. Dominate cultural practices reinforce the belief we have a right to take things in the name of the greater good. Such as we have the right to collect information because if you want to participate you need to at least give your name and address for tracking and accountability. Corporations take/impose their oil pipeline on Native American land in the national interest of commerce and shareholders. Or policymakers and researchers who go into communities of color to do research in the name of progress but don’t return to ensure communities that invested time into the project ultimately benefit — funding runs out, the person working on it moves on, etc.

I see this happening in my work too. White people or organizations will contact me asking for an informational interview or a connection to someone or a referral. I don’t have a relationship with the person asking or the relationship doesn’t feel equal. I wonder who really benefits in the end, probably not me or others in my community. CiKeithia, another Fakequity team member, blogged about this when she wrote No You Can’t Pick My Brain.

Many times, dominant culture, white culture, tells people of color we need to justify our work. We need to prove money is being well-spent, time is well-used, we have community buy-in, and prove we know what we’re doing. There is little tolerance for what the system calls risk-taking or doing something outside of the norm.

The system defaults to having people justify actions with reports written by high paid consultants, hosting feedback and listening sessions, asking for data, studies, or informational interviews. All of these actions take/extract information from communities of color. My colleague Jondou Chen lectures about this as weaponizing data. Data is taken from people and communities of color, with little control over how the data is used afterward. As he defines it people of color are turned into objects, our data is extracted and controlled by others.

Somewhere in this equation, someone is often profiting off the extraction of information. When I say someone is profiting I don’t mean that in just the literal way of someone getting rich, which does happen. Profit also looks like the white person who gets accolades for having relationships with people of color, who gets political points or access to political tables, or who knows the juicy gossip. A white colleague who is married into an African American family and works with the African American community shared: “If I bring an African American colleague to a meeting I get a lot of praise and a nod, my friend gets nothing out of it. If he brings me, a white guy, to his community I’m seen as his liability.” It took me a moment to understand that but once I did I understood what he was saying. Because of histories of colonialism, the taking of land, language, culture, money, etc. by white people/dominant society, many communities of color are reluctant, fearful, and angry at being used again. White people and systems constantly want to take something and not return the investment, it is one of the insidious and unconscious ways power is upheld.

How to Invest, Not Just take

When working with communities of color and other communities further from power and privilege (e.g. LGBTQIA, disabilities, poor, immigrants and refugees, etc.) we need to slow down and spend time building relationships. The number one-way extraction happens is when systems and people in power swoop in and take something from communities of color without reciprocating or it is token reciprocation – hiring local translators, buying food from local restaurants, sharing one-time information, etc. All of this is a good first step but it doesn’t leave the community stronger than before, power hasn’t shifted, nor has an investment been made into the infrastructure of the community.

A better way to invest is to pause and ask yourself are you the right person or organization to lead the work. As an example, a few weeks ago I had to ask myself that same question. I promised someone I’d write a piece for them about a very politically and emotionally charged race related event. However, after attending the event I realized I shouldn’t write it because I wasn’t the most impacted person in the room. While I had valid points if I wrote it the writing would have centered me. The timeline was fast to get the story written and published, and many of us wanted to get the information out because it was powerful. I had to wrestle with my ego, did I want to write the story because it would prove I was being a good ally and prove I cared and was there.

I did what I do when I’m stuck I called CiKeithia and Heidi. They both suggested I reach out and find someone else who could talk about it in a way that focused on the impacted community, which I ultimately did. I had to slow myself down and reached out to a colleague and she said yes right away. Her piece is beautiful and centered her community in ways that no mainstream news report even got close to covering. If I had written the story I would have been extracting the story of another community, filtering it through my lens, and profited off of it by being upheld as a good ally and through the attention I would have gained. This is one reason why I’m not mentioning the event, to do so would be to center and call attention to me being there. I tell this personal story because too often we don’t grapple with the personal emotions or we justify our feelings when we extract from a community.

Organizationally we should grapple with these same feelings and questions. When we take how does it feel to our staff and our communities? It is easy to justify, but how does it feel and how are we building relationships and shifting power dynamics for the long haul?

Questions to think about if you are about to extract:

Depending on how you answer these questions you may want to retool your approach to ensure you’re not extracting form a community without also investing.

If you subscribe to the blog, thank you! Please check the fakequity.com website for the most up to date version of the post. We often make grammatical and stylistic corrections after the first publishing which shows up in your inbox. If you would like to subscribe there is a sign-up box on the right sidebar.

One thought on “Stop Taking and Extracting from Communities of Color”